Executive Summary:  Local Geography professor Fred Dahms has written a book that chronicles the problems that Guelph’s municipal government has faced since 2000 to 2015 and how local politicians have responded to them.

Conflict and Compromise:  Politics and Planning in Guelph 2000 to 2015

Retired Geography professor Fred Dahms has done Guelph an enormous service by writing and self-publishing a book that chronicles most of the angry debates that have characterized City Hall over the past fifteen years. 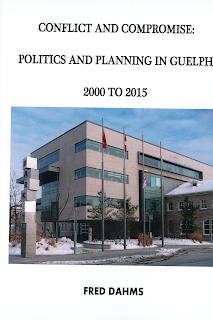 He doesn’t go into great detail over any of the issues—that would require a multi-volume series. But he does give the reader a chronology and a basic introduction that will help her for further research and to put each issue into a greater context. While there is no documentation for each issue raised (that would again result in a multi-volume series), Dahms does have a very useful appendix that lists books and websites for further research.

Just to give you an idea of how timely this book is, it starts with the chapter “Water Supply:  Drought and Controversy”, works through “Waste Disposal: Problems and Progress”, “Planning in Guelph”, “The Civic Administrations Centre:  A Legal Saga”,
“Lodging Houses and Students”, and ends with “Performance of Guelph Citizens and City Council”. There’s a lot more than this to the book too.

Reading through the book helps in several ways. First of all, for someone like myself who has followed Guelph politics fairly closely it serves as a useful “recapitulation” of a very contentious and confusing series of events. It also reinforces the fact that a great many of the problems that Guelph faces—such as water supply, solid waste, housing, and taxation—keep being “recycled” from administration to administration.

The second point that comes out is how influential community groups are in Guelph. As Dahms points out, time and time again the people of Guelph rally against just about any change to the status quo. Sometimes it appears that this is a good thing, and I suspect that Dahms would have been a supporter of any move towards protecting our water supply. But from my read of the book, I would suspect Dahms believes that opposition to high-rise rental and condominium developments have damaged the city by making it impossible for developers to build up the stock of affordable housing.

I also think that Dahms suggests that there has been too much inflammatory rhetoric thrown around in Guelph—especially with regard to taxation, which he says is pretty much “middle of the road” for a Ontario municipality of Guelph’s size.

A third point that Dahms raises is the extreme secrecy that has come to dominate the inner machinations of city staff. People in high positions come and go, they get hired, fired, get large golden parachutes, sue the city for wrongful dismissal—and the public never seems to find out why. Everything that has to do with personnel issues has become a state secret seemingly on par with the atomic bomb. I suspect that part of this secrecy comes from a twin desire to protect staff from the extreme polarization of the citizenry and also because of an attempt to encourage “professionalism” among staff. But the unfortunate result is a growing suspicion by citizens that bad things are happening and no one wants to admit it in public. (You get a sense of the author’s personal frustration over this in a very useful podcast published by Adam Donaldson at Guelph Politico.)

Unfortunately, because of the book’s big-picture focus, it doesn’t get into the “nitty-gritty” of various issues. For example, it mentions in passing that the Wet-Dry facility was a response to Guelph’s landfill filling up, but doesn’t talk about the seemingly endless search by very expensive consultants to find a new site. (As memory serves, all the consultants were able to find were places where the province’s maps were in error. Provincial law forbids landfills on wetlands and good farmland—which pretty much defines the entire area around Guelph.) He does mention in passing that Council was discussing an incinerator, but Dahms doesn’t mention the terrible state of incinerator technology at the time. Nor does he mention that the Wet/Dry proposal didn’t come from highly paid staff, but rather a self-taught student who was given a grant by the university group OPIRG. (One of the issues with professionals is that they generally have a very hard time thinking “outside of the box”.) As a result, I’d suggest that people see Dahms’ book not as “the final word” on various contentious issues, but rather as “the first step” on the process of learning more. As such, the book is well worth the $21.75 it costs at the Bookshelf for a hard copy. And it’s a real steal if you are willing to “hold your nose” and purchase it as an Ebook from Amazon.

Conflict and Compromise:  Politics and Planning in Guelph 2000 to 2015 is available at the Bookshelf and Amazon.

ThatGuelph is the go-to digital magazine for people who care about Guelph, the Royal City, and want to get the most out of it.

We provide insight into the people and events that shape the city, and help readers make better choices about everything from where to eat, to where to buy.

This Is The Most Expensive Home in Guelph Right Now!